Every year, particularly around the spring season with the advent of the warmer weather, the colony begins to grow once again in size. As a natural part of their life cycle a breakaway new colony swarms off to start a new home some distance away from the original hive.

So swarming is a natural part of the bees’ existence and unfortunately any cavity which is secure from the elements becomes a target home for the new swarm. Hence bees will colonies house roofs, meter boxes, pool motor covers, and drums, waste bins, bird logs, empty tree trunks and any other place they feel will make a warm secure home.

We cannot afford to eradicate our honeybee populations, whether they be managed colonies in beehives or feral colonies in the wild which are not managed by beekeepers.

Bees provide one of the most important pollination vehicles for food security as well as being able to produce large amounts of excess natural honey when properly managed in beehives. Yet unfortunately bees are also very protective of their valuable commodities and the bee sting venom is one of the most potent venom of the animal kingdom. So when bees move into suburban, industrial or agrarian areas and become a nuisance to other people and animals they may need to be removed.

Ideally a competent beekeeper is the right person to carry out this function because he understands bee behavior and our African and Cape bees can become very aggressive when their homes are disturbed.

A person not trained in carrying out bee removals should never attempt to relocate a colony of bees. Bees, when aggressive and uncontrollable can kill humans and animals. The cost of spending a night or two in the intensive care unit of any hospital is not worth claiming the reputation of removing a swarm of bees if you have never done it before. 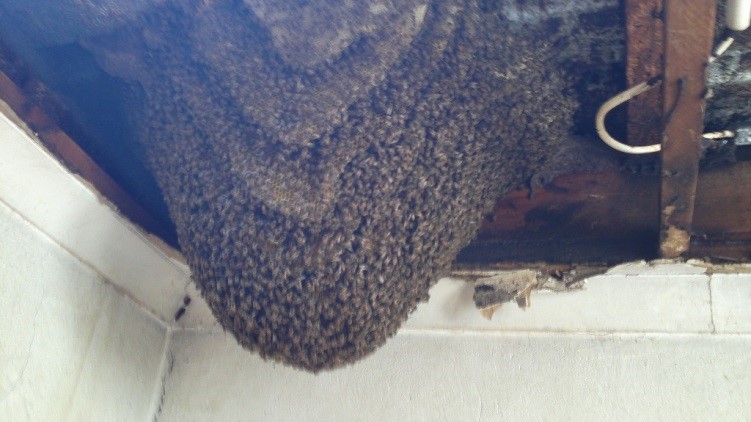 A large colony of bees in an outhouse which has been left too long. An untrained person should never attempt to remove a colony such as this. 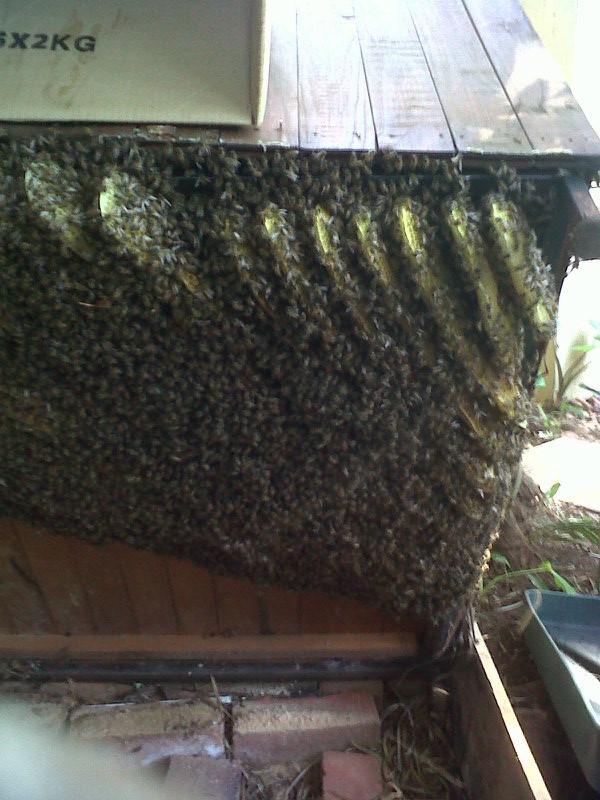 These bees were left too long under the floor boards. Although successfully removed, the cost of doing so escalates the longer the homeowner does nothing about it!

The sooner a colony of bees is removed after it has settled into a new home / cavity / inconvenient position the better.  Once you leave bees to settle they will immediately start building new combs and bees which have been in their nest for a number of years are extremely more difficult and sometimes impossible to remove and far more protective of their home!

In assessing the need to remove or relocate an established feral colony of bees SABIO recognises the four key factors which have to be taken into account.  Not all wild colonies need to be relocated.  Bees which have made their home high up in a tree trunk and which are not bothering anyone should be left to carry on doing what they do best.  Bees which have taken up home in an electric box outside a children’s nursery school should be removed immediately after they have moved in.

The four key factors are as follows:

Threat to people or domestic animals

Human life is always more important than a colony of honeybees and if the bees are a threat to people and animals or livestock they need to be removed.

This of course is the most important factor because the bees, their honeycomb and especially access to the queen (which is particularly elusive) must be accessible to get the bees out.

Bees which are in a water meter box are easily accessible but those which have made their home in the cavity of a brick wall may not be so accessible, unless you are prepared to break down the wall. 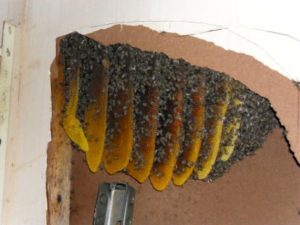 Bees behind prefabricated walls are accessible.  By gently tapping on the wall you can ascertain the spread of the combs, cut around them, and expose the colony for relocation into a functional beehive.

It may not always be necessary to intervene with a colony of bees, as mentioned above.

However, although immediate intervention may not necessarily be needed, future intervention might suggest it would be prudent to carry out the job sooner than later.

What kind of intervention is required? Can the colony be physically relocated by hiving them into a proper managed beehive; can the bees be repelled using a repellent, or should the bees be removed and released back into the environment in a secure location?

We do not recommend remove and release methods, especially in suburban areas as often the bees will just find another inconvenient structure to move into which will necessitate a follow-up removal. 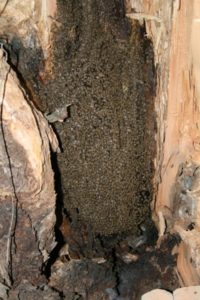 Although generally bees in tree trunks on uninhabited land pose little threat, where they have been openly exposed after the tree was struck by lightning they are accessible and can be safely relocated – if you know how. There are about 30 000 bees in this colony and all were safely accommodated in a warm secure beehive.

If bees are being aggressive, stinging people and livestock and there is an immediate danger to human and animal life then it may, unfortunately be necessary to destroy the colony.

In most cases this should be the measure of last resort and competent beekeepers would never adopt this approach if the bees can be accessed and humanely removed. 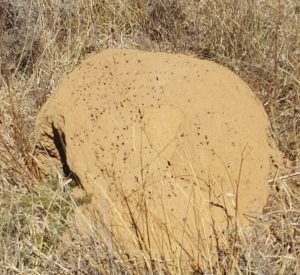 Bees choose strange new homes! A healthy colony lived inside this anthill and was successfully relocated into a beehive to be more productive and protected from the elements.

Why pay for Bee Removal Services?

Many people argue “Why should we have to pay for bee removals? After all, we are giving a beekeeper another swarm of bees for free! It’s not our fault that the bees moved into our property!” Well the same can apply when a heavy storm knocks over a tree in your garden! Do you phone the tree fella and say “Hey, I’ve got some free firewood for you?”

Competent and registered beekeepers incur costs when carrying out a bee removal. Like a plumber, an electrician or a handyman who comes to fix up something at your premises which you cannot do yourself, the same applies to a beekeeper with knowledge, expertise and the confidence to work with dangerous creatures such as honeybees.

There are costs involved in travelling expenses, purchase of equipment and beehives to re-hive the colony and sometimes labour costs where trained personnel are used to assist.

SABIO supports its members who carry out these services and charge a professional fee for doing so.

It is always important to agree with the beekeeper up front what his fee will be. It is also important for you to make it clear from the start if you are adamant that the bees should not be exterminated. Refer to the SABIO Code of Conduct (About Page) regarding the standards expected by SABIO of its members who carry out these services.

All persons who keep bees and who carry out bee removal services are required by law to be registered with the Department of Agriculture as a Beekeeper.

Insist that the bee remover is a registered beekeeper.

SABIO does not support those persons who offer the service of removing bees and who are not registered beekeepers and do not keep bees. They have little interest in preserving honeybee colonies and generally release the bees back into the environment some distance from where they removed the colony. 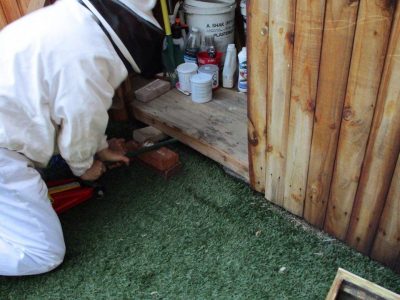 When bees move in under a Zozo Hut, you need to jack up the entire structure! 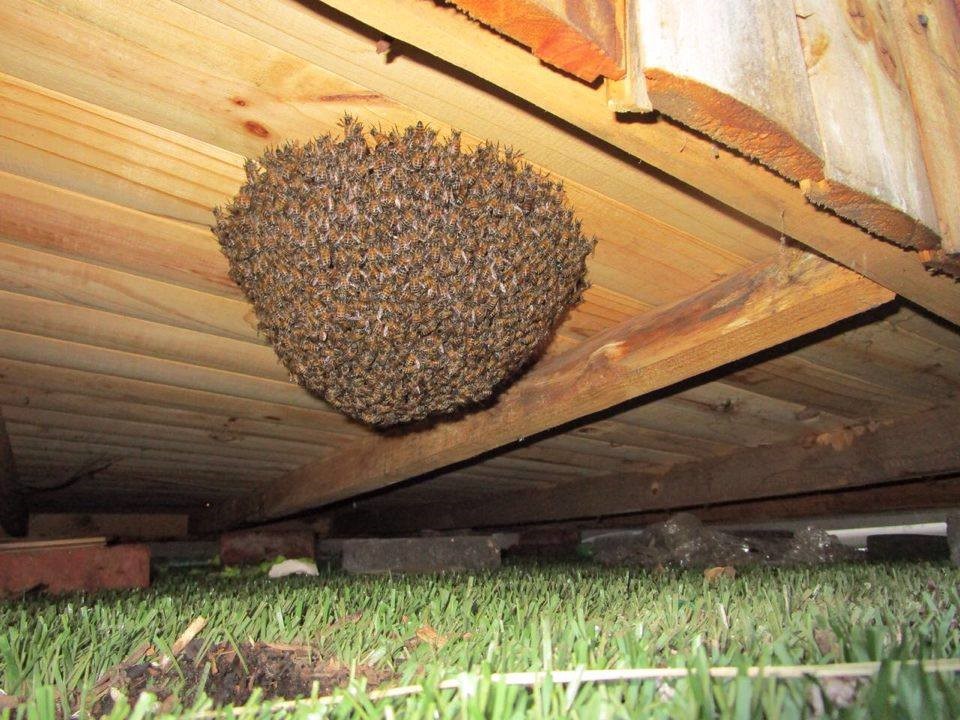 And there they are, quite accessible within arm’s reach and easily relocated into a new beehive! 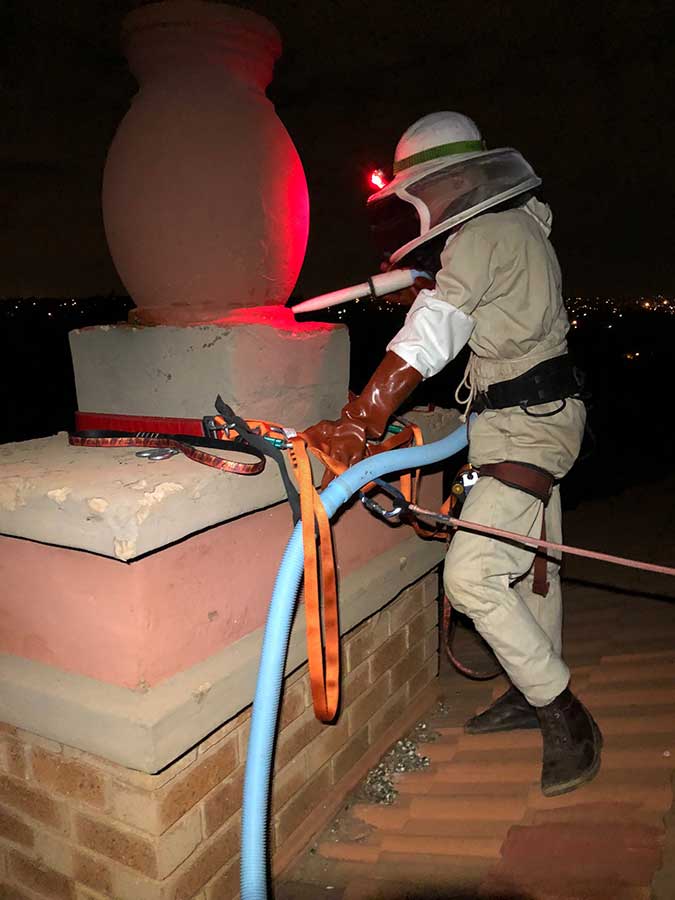 Removal and relocation of bees from a chimney on a roof edge using safety gear.

Removal and relocation of a colony through the ceiling due to inaccessibility from the top. 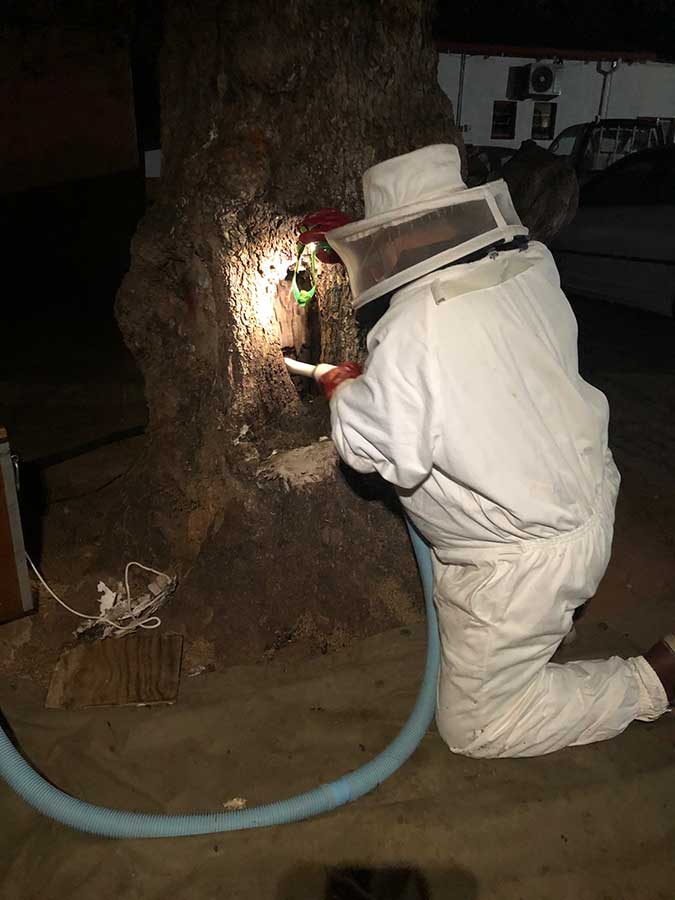 Removal and relocation from a cavity in a tree. 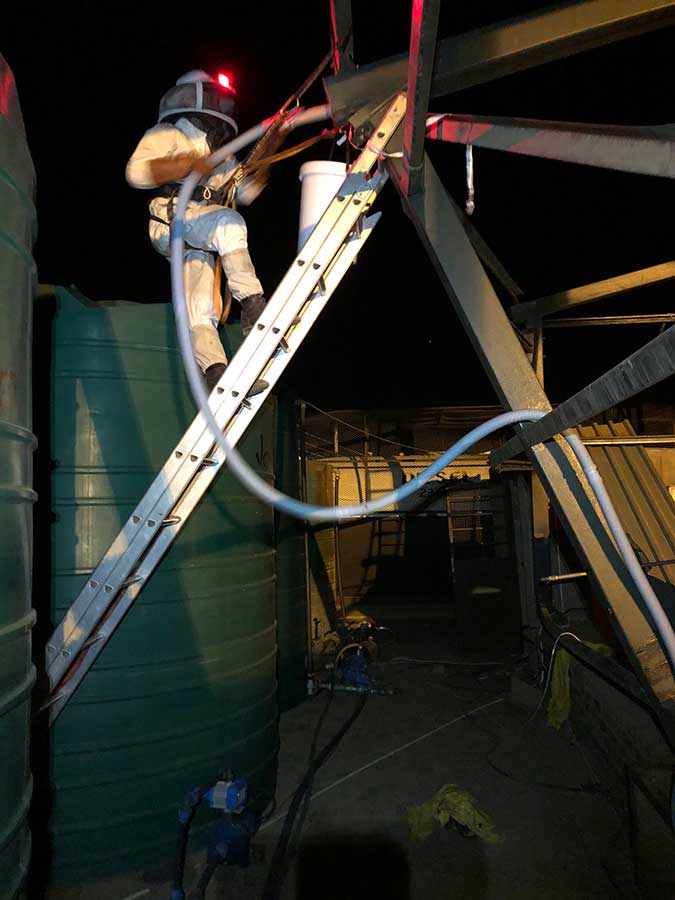 Removal and relocation of bees from the steel structure of a warehouse.

SABIO maintains a record of its members who are registered beekeepers and who provide bee removal services in the different provinces.

Notice: Please consult your local association as listed under the Beekeepers’ Association TAB for approved bee removers or contact you Local Authority (Municipality) Department Environmental Health or Parks for bee removers registered with the Municipality.

Bees love moving into bird-logs. But when the home gets too small they need a bigger apartment to bring up the next generation of kids! This comb, nestled inside a large bird-log, is full of brood. 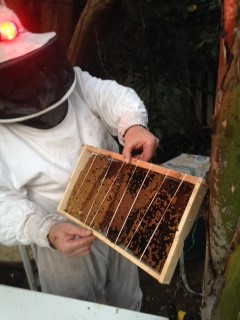 The professional bee removal service provider will save as much as he can from the home colony for furnishing the new beehive. 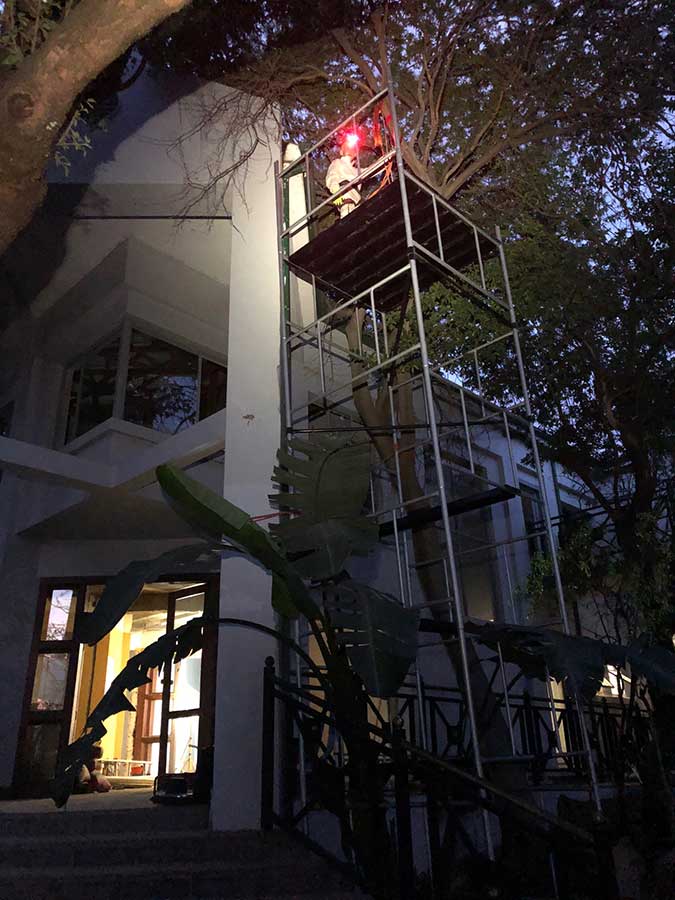 Removal and relocation of bees from the roof edge of an office building. 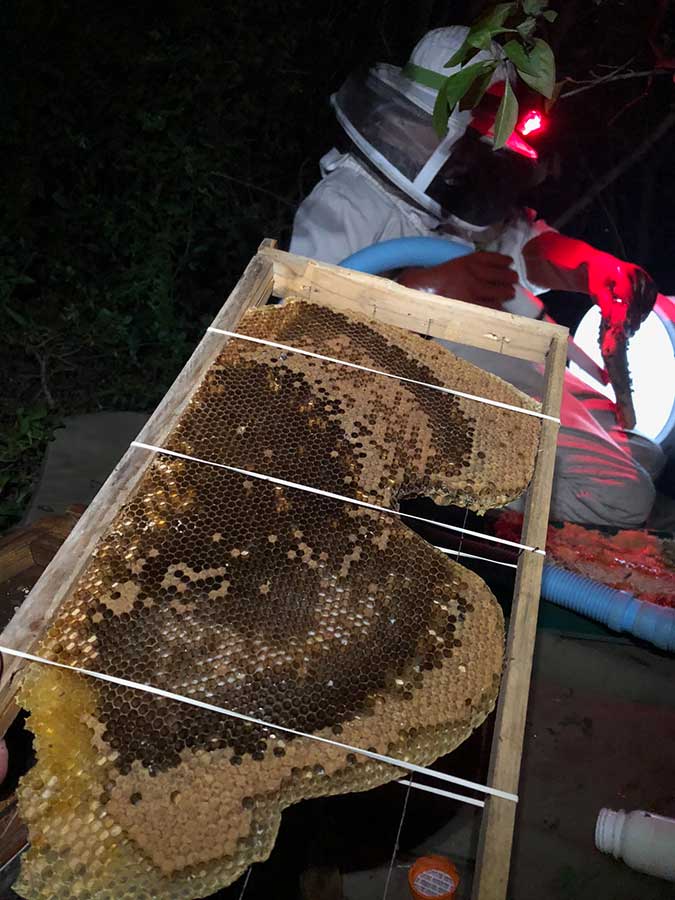 Combs are cut and placed in hive frames where after the bees will be added and the colony relocated. 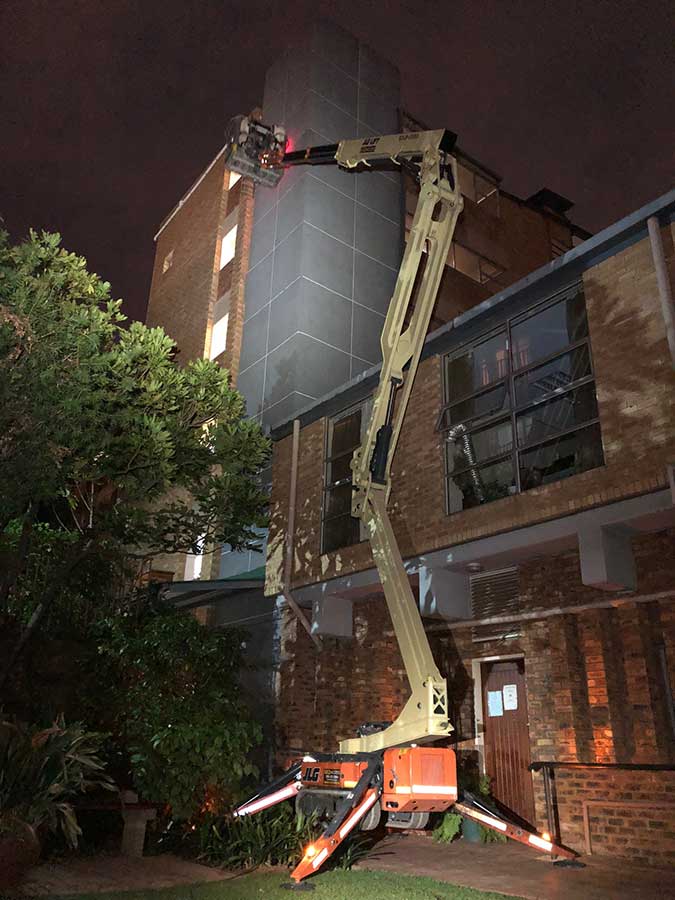 Bee removal and relocation from the sixth floor of an old age home required a cherry-picker.
We use cookies on our website to give you the most relevant experience by remembering your preferences and repeat visits. By clicking “Accept All”, you consent to the use of ALL the cookies. However, you may visit "Cookie Settings" to provide a controlled consent.
Cookie SettingsAccept All
Manage consent