Dr Bing Wiese was the Director of the Agriculture Research Council’s Plant Protection Research Institute (PPRI) for almost thirty years. With his interest in beekeeping, the PPRI became the official “home” of beekeeping. During this time, Dr Wiese fostered bee research capacity in South Africa and established the Apicultural Advisory Committee, to coordinate bee research in South Africa. He served as Patron of The South African Bee Federation, the forerunner of SABIO. The Dr Wiese award was instituted by the SAFBA to recognize technical contributions to beekeeping practise and has only been presented twice. First to Dr Adriaan du Toit in 1999 for establishing a practical methodology to calculate sufficient pollinator numbers on row crops during seed production (sunflower, onions and carrots) which is still used today. The second recipient was Mr Sidwell Banne in 2007 in recognition of his coaching and mentoring of development beekeepers throughout South Africa.
Dr Hannelie Human was honoured at the SABIO AGM on 5 December 2020 with the Dr I.H. (Bing) Wiese award for her outstanding technical contribution to beekeeping in South Africa. This award was made by the SABIO Chairman in recognition of Hannelie’s work during the COVID-19 lockdown period. She kept the SABIO Board up to date on local as well as international developments concerning COVID-19 and its potential impact on local beekeeping activities by following the pandemic unfolding in the international beekeeping environment. Hannelie was responsible for developing the SABIO website page on COVID-19 and instrumental in drafting the South African Beekeeping Covid-19 Code of Practice for beekeepers to follow when working bees. 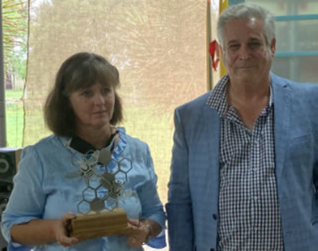 She kept in contact with Apimondia officials and country members as well as FAO in reporting and providing survey feedback on our unique circumstances in South Africa. Using this information and in particular producing the Beekeeping Covid-19 Code of Practice enabled SABIO to approach DALLRD with a proposed a bee movement permit system. This proposal was accepted by the Department. South Africa was one of a few countries where controlled beekeeping practices were able to continue during a full level 5 Covid-19lockdown period as well as during times of a curfew. The South African bee movement permit system received international recognition from Apimondia as well as the FAO. Hannelie is well-known in the local and international bee research environment and has published more than 30peer- reviewed research papers, 35 popular research articles and contributed to 4 book chapters on honeybees.

We use cookies on our website to give you the most relevant experience by remembering your preferences and repeat visits. By clicking “Accept All”, you consent to the use of ALL the cookies. However, you may visit "Cookie Settings" to provide a controlled consent.
Cookie SettingsAccept All
Manage consent